God is so good! This months blog will be short but jam packed of good news. This year more than any other year since we have gotten started we have had an influx of students join our ministry who were previously opposed to, or passive in, a relationship with God and who have now become convinced in their hearts that Jesus is Lord and are determined to live their lives for him. 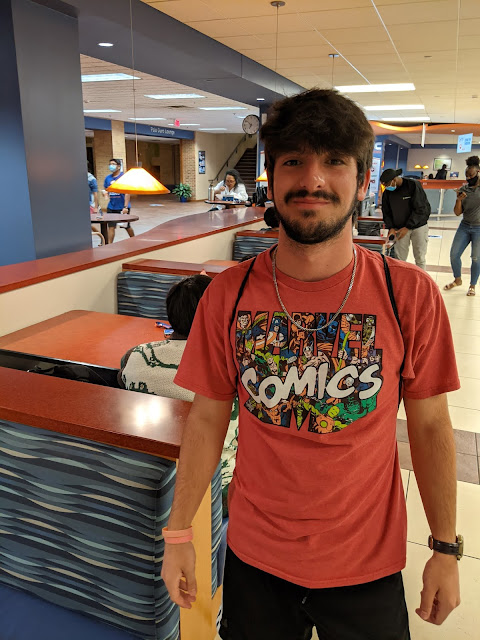 Connor is a new guy in our ministry this year who came to college skeptical of Christianity. So skeptical that he says in high school he used to debate people who believed in Jesus and convince them that God was not real. This year he said he made friends with several guys in our ministry. Taylor Bass and Jalen Quintana invited him to play spikeball. As he put it, he found friends first and then he found God. At the same time that he joined a core and started doing a one on one bible study with one of our corefas, Taylor Bass, he also met several other campus ministers from several other campus ministries. He began meeting regularly with several of them and is now doing 5 bible studies a week.  Taylor encouraged him to not be afraid to ask hard questions about God and scripture, another campus minister gave him a book "A case for Christ", another campus minister challenged him to read the bible and pray every day for a month. Now Connor says he is so convinced that God is real, that Jesus is God, and that his heart and his life are being transformed because of this newfound relationship with Jesus. He told me, "I'm so happy for no reason, I'm dancing, I'm working through past relationships and I'm forgiving people that I thought I would be angry with forever. This weekend I'm going back home to the church I grew up in and I'm going to tell my story, and I'm also going to find the people who I used to hang out with in High School that used to listen to me tell people God isn't real, and I'm going to tell them that Jesus is God."

Praise God for his work in Connor's heart! And thank you for your investment in college minsitry. Connors story is only one of many.  I could also write about Justin who told me that he wants to aim to be like Jesus first, and let a relationship follow, or Corey who told me this last week that "My skepticism is waning, if this whole gospel thing is true that would change everything about who I am and the way that I view the world" or Sarah who told one of our female focus pastors that she wanted to be a Chrisitan for the first time last month and is getting baptized soon! As difficult as this pandemic is and has been for so many, I can't help but wonder how much God wanted to use these difficult times to break up hard soil, so that seeds could be planted, and fruit could grow! 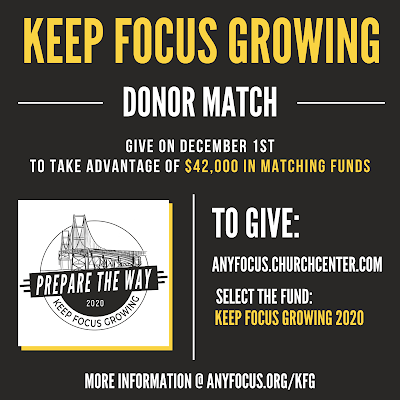 I also want to announce that we will soon be starting our annual Keep Focus Growing fundraiser. Some of our generous donors have banded together and agreed to match up to $42,000 in total donations during this campaign. So if we receive $42,000 in total contributions, they will kick in a SECOND $42,000! Your first chance to give will be on December 1st!

While our missionaries raise their own support, that doesn’t provide money for evangelistic events and materials, administrative costs, or money to seize new opportunities that come up during the year. The extra investments from our annual fundraiser make sure we are poised and ready for what God is doing on campuses around the DFW area.

God has already done so many incredible things, but we know we’ve hardly scratched the surface of the real need! Only a small fraction of the students on our campuses are involved in a Christian ministry, and many schools in DFW are void of Christian community altogether. Even among the students who have experienced real transformation in Christ, we know He isn’t finished with them. Your investment makes a difference.

So that you know the money you give here is managed and spent well, we have been accredited by the ECFA (Evangelical Council for Financial Accountability). ECFA accreditation is based on standards of financial accountability, transparency, sound board governance, and ethical fundraising.

Lastly I just want to say thank you again for all of your generosity and for your partnership in ministry. Without you reaching students like Connor would not be possible. Thank you for all that you do for me, for the students at UTA, and for God's kingdom. As always, please let me know if there is any way that I can be praying for you, and don't forget to check out this months student testimony down below!