The last two weeks have been like nothing else I've ever experienced in ministry before. With restrictions from the University on where we can meet and how many people can be present we knew going into the two weeks of Maverick Stampede that we would not be able to operate like we usually do. There would be no pajama dance party to attend, or candy poker night to invite people to, or a waffleopolis to be overwhelemed by with the amount of people who come to that event just to eat one free waffle. None of those would be happening like they have in years past. In fact we weren't even sure how many students would be on campus. And with all of this uncertainty and our unability to rely on strategies we've used to reach the campus in the past, there was anxiety for us and for our student leader team. What would college ministry even look like this year? How could God possibly work with so many restrictions impeding our efforts?

Well, good news, God is not impeded by any restrictions!

So far in the first two weeks of college starting up we have met just as many students as we do in a typical school year, every core (small groups) that have met have not only had new people attend, but they also have reported a number of those new students wanting to start one on one bible studies. I've heard stories of which I'll get into about students wanting to hear about Jesus for the first time, or for the first time in their life taking their faith seriously. I've heard students express immense gratitude that there was someone on campus that wanted to be their friend. And I've seen God work in ways that would be unexplainable if not for His amazing goodness and grace. 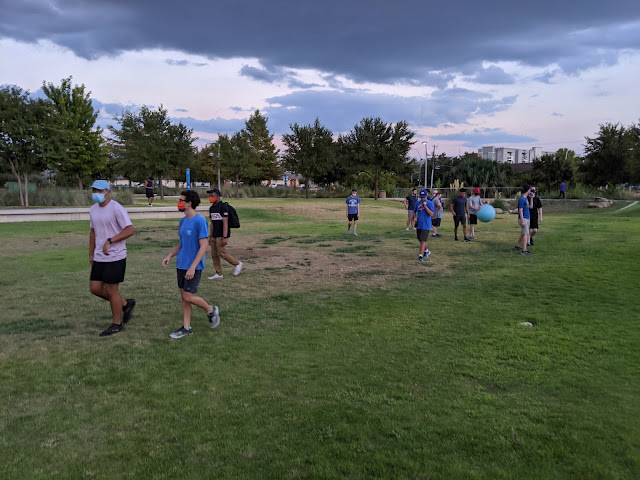 Instead of having one large ministry event that we would invite students to, every day of Maverick Stampede our student leaders would invite small groups of people they had met to games and events that they would host. Giant Kickball was just one of the many games that I saw our student leaders hosting and inviting people to with the intention of being their friend and inviting them into Christian community. I know for a fact that several of the guys in this picture joined a core for the first time later that week! 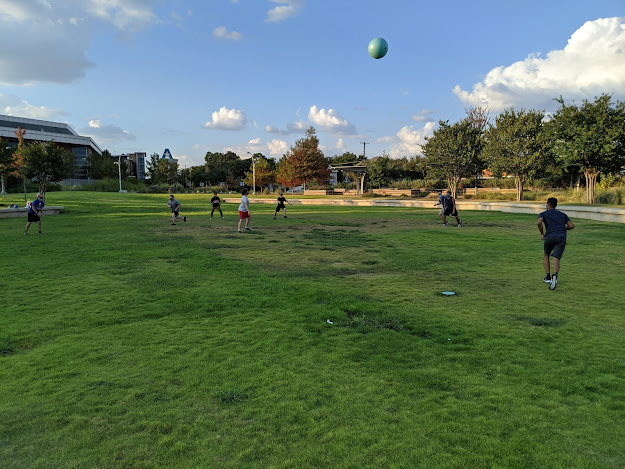 Because our student leaders also responsibly practiced CDC and UTA guidelines including social distancing, small group sizes, being outdoors, and mask wearing not one student that came to our Maverick Stampede events contracted Covid. That was definitely another one of our concerns and while I'm so proud of our student leaders for setting the example, I'm also so grateful to God for his protection. A lot of universities are seeing spikes in Covid cases and are having to shut down several weeks after opening. Even if we did have to God would still be so so good. But I'm certainly praising him for the fact that we are still able to meet responsibly in small groups!
Before I wrap up I actually wanted to quickly highlight one story where I definitely see God working. The first is through this guy. 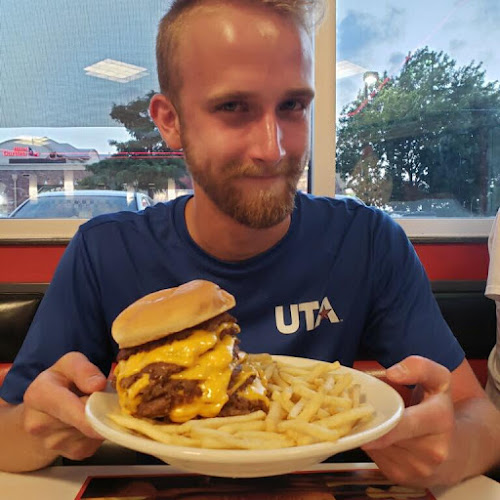 This young man with a "healthy" appetite is Taylor Bass. Taylor is one of our corefas or Core Facilitators. Taylor decided to make the most of these first couple weeks of Maverick Stampede to try to meet as many students as he could during these first two weeks when so many students have yet to make any friends. Taylor decided to go to the connection cafe which is UTA's dining hall. When he walked up he saw that it was closed for their cleaning hours. At the same time another guy walked up who looked disappointed that the dining hall was closed. Taylor said something to him and the guy told Taylor that he had just had his wisdom teeth taken out and was hoping the hall would be open and he could find something soft to eat. Taylor told him that he was also hoping to grab lunch, but that he knew a local place that sells great mac n'cheese and asked the guy if he would want to go with him to get lunch. The guy said sure and over the course of the conversation the young man brought up that he was a christian and that Taylor was the first friend he'd made since coming to UTA other than his roommate. Taylor told him that he also was a Christian and that he was a part of a college ministry called Focus. The guy then proceeded to tell Taylor that before he had gone to the lunch hall he had been praying and asking God for a christian friend who could connect him to a ministry. Taylor was amazed and so was I when he told me about this. That new guy has already attended watching our new sermon series and has also joined Taylor's core and they are going to start studying the bible together one on one. God is so good.
That is only one story of many that I'm hearing from across the campus of how much God is moving right now even in all of this confusion. Thank you for investing in Taylor and for providing a place where this young man can make friends and grow in his relationship with Jesus. None of this would be possible without your generosity. All glory be to Christ!
Don't forget to check out the student testimony below.