September 06, 2017
Hello everyone! The first two weeks of classes, otherwise known as the Maverick Stampede, are behind us here at UT Arlington. It is odd to think that just two weeks ago the students who are now a part of our community and involved in our small groups, we had yet to meet. But we spent those first two weeks meeting as many students as possible. We were on campus every day attending every event at the university that we could and greeting countless students to UT Arlington for the first time. For many we had an opportunity to be their first group of friends in college. For some we were the first Christians they had ever interacted with. For nearly all we got to be a source of joy, and a welcoming face to an environment that can otherwise be pretty intimidating. 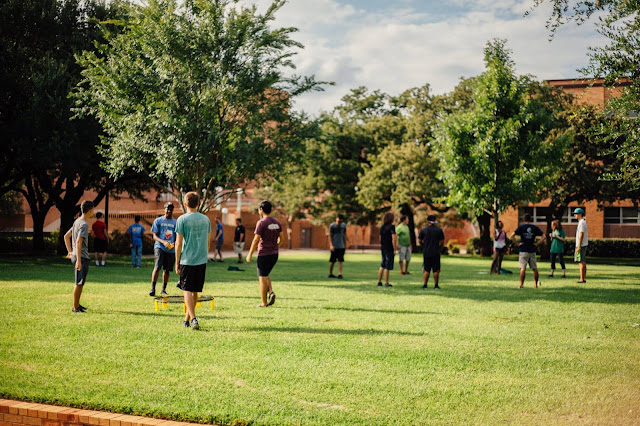 On Monday I hosted my first bible study with a group of guys, all new to UTA, and we discussed what it means to love others the way that Jesus has loved us.

On tuesday, another group of guys hosted their own small group on the same topic and today after I messaged them asking them how it went. They responded with, "We've got more guys than we know what to do with!"

This response also reminded me of another story of our Lord in the book of John, which "coincidentally" I've been reading over the summer.

Afterward Jesus appeared again to his disciples, by the Sea of Galilee.[a] It happened this way: 2 Simon Peter, Thomas (also known as Didymus[b]), Nathanael from Cana in Galilee, the sons of Zebedee, and two other disciples were together. 3 “I’m going out to fish,” Simon Peter told them, and they said, “We’ll go with you.” So they went out and got into the boat, but that night they caught nothing.
4 Early in the morning, Jesus stood on the shore, but the disciples did not realize that it was Jesus.
5 He called out to them, “Friends, haven’t you any fish?”
“No,” they answered.
6 He said, “Throw your net on the right side of the boat and you will find some.” When they did, they were unable to haul the net in because of the large number of fish.
7 Then the disciple whom Jesus loved said to Peter, “It is the Lord!” As soon as Simon Peter heard him say, “It is the Lord,” he wrapped his outer garment around him (for he had taken it off) and jumped into the water. 8 The other disciples followed in the boat, towing the net full of fish, for they were not far from shore, about a hundred yards.[c] 9 When they landed, they saw a fire of burning coals there with fish on it, and some bread.
10 Jesus said to them, “Bring some of the fish you have just caught.”11 So Simon Peter climbed back into the boat and dragged the net ashore. It was full of large fish, 153, but even with so many the net was not torn. 12 Jesus said to them, “Come and have breakfast.” None of the disciples dared ask him, “Who are you?” They knew it was the Lord.
It's almost humorous how God's Spirit uses the word to minister to us when we least expect it. When our student leaders responded with "We have more guys in our small group than we know what to do with" my heart shouted the same response that the disciples had after catching all that fish! 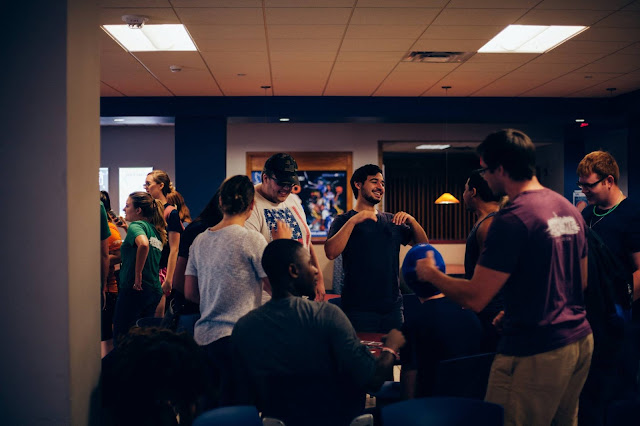 There is really no other way to explain what I have seen God doing on our campus. I alone met over 80 new students in the first week of class and got nearly every single one of their phone numbers. Not many of the ones that I had texted showed up to our first fellowship meeting on Thursday. But many others who I personally had yet to meet were there in attendance because they had either been met and invited by one of our student leaders or had seen an advertisement on campus and had decided to visit themselves! 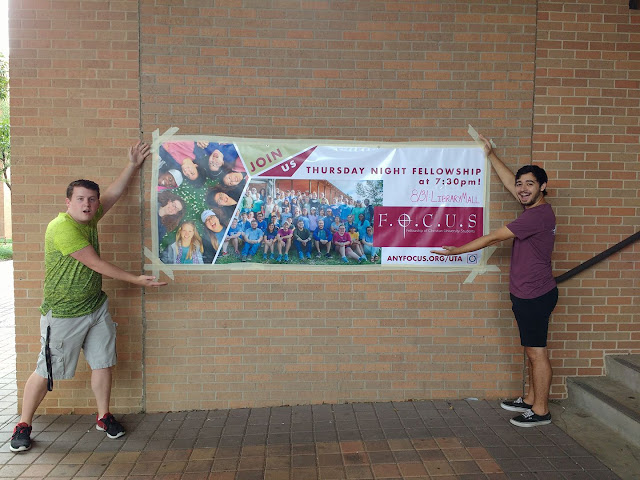 We worshiped God together that night with about 100 people on our campus, some of whom we had no idea how they had even heard about us. But there they were, joining in with our community. When I think about how the Lord uses our small efforts to bring about great things in the Kingdom I am blown away. That first night we didn't even have a classroom to meet in, but rather just met in the grass outside the campus library.  So the real reason that people came wasn't for the sake of being comfortable. It wasn't even because we had texted some of them relentlessly inviting them to all of our events. Many of those people never showed. But, when I look at this picture and I think about all of the people who were in attendance and all of the college students who will be joining life changing small groups, and the amount of students who will say yes to studying scripture with one of our student leaders this year, my only response is.

Thank you so much for praying for this community. Please continue to pray for our campus. There are 40,000 students on this campus. There are so many students still out there that are equally in need of the good news of our God. Pray that we would be bold enough to meet them, and that they would be open enough to hearing God's call and invitation for them to find life. Pray for our small groups, pray for deep friendships to form out of those and for all of the students to grow in their faith together. And pray that students would say yes to studying the bible one on one with one of our student leaders. I fully believe that college students engaging in scripture with someone there alongside them that is willing to help guide them through their questions is one of the most effective ways that we can make disciples of Jesus in this current day and age. I love you all, please let me know if there is any way that I can be praying for you. Your kindness and generosity I will always be grateful for. Don't forget to check out the student testimony below. I always find these to be so encouraging and I hope that you will too!